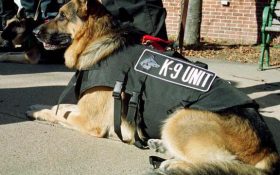 A police dog in Spain apparently has been trained to perform CPR.

In a video of a demonstration posted on Facebook by police in Madrid, Poncho sprang into action when his partner fell to the ground and pretended to be unresponsive. The dog’s actions mimic cardiopulmonary resuscitation.

Police wrote Poncho “did not hesitate for an instant” to save a life.