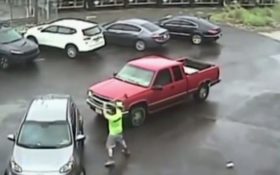 A road rage suspect seen on surveillance video hitting a man with a sledgehammer after smashing the windows out of a vehicle is being sought by Philadelphia police.

Video of the parking lot attack was posted online by the police department Wednesday. It shows the assailant exiting his pickup truck with a sledgehammer and busting out the driver’s side window of an SUV.

Police are still trying to identify the attacker and the victims.