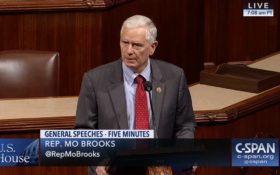 The week started fabulously for the CNN and its band of radicals: CNN salivated at the faked Michael Cohen story originally from BuzzFeed News. Then, they badly distorted the narrative of the Covington Catholic kids both within just a few days.

Since being utterly EXPOSED, the network so far has been silent.

Rep. Mo Brooks,R-A.L., knew this was the best thing for the American people to see.

Brooks took to the House floor on Thursday and had stern words for the network dubbed, “the most trusted name in news,” a hallmark he went on to mock.

Brooks served a ruthless wake-up call that shook the entire House floor. Passionately he spoke about the obsessive frenzy that CNN uses to stir an anti-Trump, impeachment agenda.

“Last week exposed the CNN vitriol, prejudice, bias, and deception that crowned CNN as the fake news king,” he said.

CNN’s parade of impeachment talk was so shortsighted and grave, the network had no choice but to acknowledge the embarrassing rejection of the story by Robert Mueller’s office. “CNN, strike one,” Brooks said.

Following that incident, Rudy Giuliani went on Twitter to commend the Mueller team for reporting the facts:

I commend Bob Mueller’s office for correcting the BuzzFeed false story that Pres. Trump encouraged Cohen to lie. I ask the press to take heed that their hysterical desire to destroy this President has gone too far. They pursued this without critical analysis all day. #FAKENEWS

Brooks went on to blast the network in its hysteria for condemning the Covington Catholic boys, more importantly its assumptions of the March for Life supporters as total racists.

“Slander,” Brooks mentioned. All because CNN decided, no, it wasn’t interested in the truth.

“Had CNN done its homework from the very beginning,” he went on. “That the students were the victims of African-American races who hurled insults at and sought to intimidate white teenage students, and the victims of Native American political activists who rudely accosted the students, beat a drum in their faces and yelled that white people should leave America.”

Nathan Phillips, the Native American at the center of the incident, was exposed as having never served in the Vietnam War like he claimed.

“If you support border security and protecting American lives, you are a fact-free, fearmongering Trump supporter who must be attacked at all costs, is that really CNN’s viewpoint?”