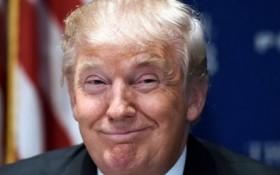 That’s according to a recent poll, where over 53% of Americans said the news media was guilty of exaggerating difficulties in the Trump administration.

More than half, 51%, also said the media was unfairly critical of the 45th president in the NBC News / Wall Street Journal poll, released in late February.

We at The Horn News agree.

For example, here’s a picture of the president the media will NEVER show —

Single best photo of presidency so far. All the haters, all the pounding, all the confusion and drama melt away on a late winter's day… pic.twitter.com/1RAntr4Rgc

Here’s the president walking with his grandchildren, shared by Matt Drudge from The Drudge Report. It’s a powerful image of the world’s most influential person, captured in a tender moment with his family.

It’s a stark reminder of the humanity behind the presidency — something the liberal media ignores.

It seems they’d rather focus on negatives. Is there any wonder their ratings are so poor?