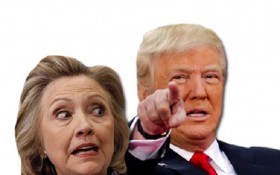 President Donald Trump put out a series of tweets Monday that supporters are calling “must see” — because they have failed Democratic presidential candidate Hillary Clinton shaking in her boots.

Trump’s message was simple: I haven’t forgotten about Hillary.

And neither should voters… or law enforcement!

Trump demanded answers for the “crooked schemes” being launched inside Washington, D.C. against his administration, and saluted a recent report by Fox News’ morning program “Fox & Friends” —

Such amazing reporting on unmasking and the crooked scheme against us by @foxandfriends. "Spied on before nomination." The real story.

Then he started asking questions about Hillary’s allegedly illegal dealings… and if it was part of greater plot against America.

Was the brother of John Podesta paid big money to get the sanctions on Russia lifted? Did Hillary know?

Did Hillary Clinton ever apologize for receiving the answers to the debate? Just asking!

We want to hear from you, our readers.

Is it time for the president to move past Hillary’s alleged criminal past — or should voters demand justice?

Sound off with your opinion here —