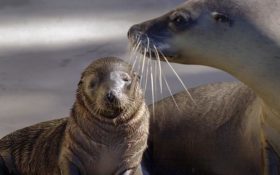 A college student has startling video of a sea lion snatching a girl off a dock and yanking her into the water on Canada’s West Coast.

In Fujiwara’s video , the sea lion pops up toward the girl as bystanders laugh. Then she sits by the pier’s edge. In an instant, the massive mammal shoots up, grabs her dress and pulls her into the water as people scream.

The sea lion disappears as a man plunges into the water and helps the girl out. She doesn’t appear injured and walks away with adults.