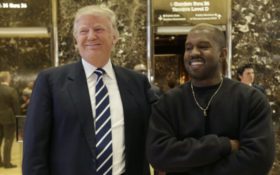 On Monday, hip-hop superstar Kanye West defended his decision to wear his “Make America Great Again” during a TV interview after the show’s host asked him to remove it — and what he said is going viral.

West appeared on “TMZ Live” and wore his MAGA hat while he sat down for an interview with TMZ host Harvey Levin. Levin warned the rap mogul that he was sending the wrong message to the black community by supporting President Donald Trump.

West shot back athat he is an American and he supports “whomever ends up in office.”

Opening up the interview, Levin said to West, “I would love it Kanye if you would not wear that hat.” He added, “But I know you won’t do it, because you have a right to do it.”

Levin continued, “I’m all for free speech, but when you wear that hat, which is a symbol of Donald Trump. I don’t understand why that isn’t a mixed message, because Donald Trump has not been a friend of the black community,” Levin said.

West added, “I am American, and I support and give my ideas and support and brilliance to whoever ends up in office,” he said. “That’s my stance, as an American. I support our president, bottom line, no matter who they are. This represents to me [is], y’all can’t bully me.”

The music superstar also said that the hat represents a sense of freedom of speech for him.

West concluded that he hopes his sense of positivity and love towards Trump helps Americans to see the president in a better light.