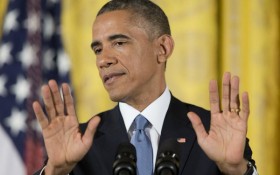 President Donald Trump shared a stunning video on Thursday that showed exactly what former President Barack Obama and his political allies think about illegal immigration — and their hypocrisy is jaw dropping.

The short 0:25 second video is a compilation of top Democratic leaders condemning illegal immigration and warning that our border system is totally broken.

The video starts with Obama saying, “Our immigration system is broken.”

“Illegal immigration is wrong. Plain and simple,” Schumer tells the camera next.

“All Americans … not only in the states most heavily effected, but all over this country, are rightfully disturbed by the large number of illegal aliens entering our country,” Bill Clinton is shown saying at a State of the Union address.

“The people that should be here are those that come legally,” Feinstein claims.

“We have to send a clear message,” Hillary Clinton tells CNN. “Just because your child gets across the border, that doesn’t mean that child gets to stay.”

Sounds an awful lot like what Trump and his supporters have been saying.

So where is the media outrage over these Democrats statements?

We’ll save you the time — the outrage didn’t exist.

Instead, the mainstream media was gushing with pride over the Obama administration’s family separation facilities.

On Jun. 14, 2014, an Arizona ABC News station took a tour of the holding cells for illegal minors in Nogales, Arizona and gave the facilities a glowing endorsement.

The children “can play Frisbee and watch TV” the station told viewers. The media bragged that the kids have access to a phone bank “to call their families” and that the children have no intention of going home, but instead see the holding facility as a “stepping stone for getting into the U.S.”

Under Trump, the media is comparing these same exact facilities to concentration camps from the Nazi holocaust.

“Yes, you can call the border centers, ‘concentration camps’,” started a Washington Post headline on Wednesday.

“Not Every Concentration Camp Is Auschwitz. Why it’s fair to use the controversial phrase in the debate over U.S. immigrant detentions,” Slate Magazine said.

Thankfully, we have video evidence to show what Democrats thought about illegal immigration and border control before Trump.

Don’t worry, the Republicans, and your President, will fix it! pic.twitter.com/xsbuPzXbHj

There’s is no doubt that America’s illegal immigration system is broken. Even the Democrats admit it.

Selective outrage over the broken system doesn’t actually help children. That 0:25 second video is proof that liberal Democrats are using these poor children only to advance their political agenda.

Once the media outrage is done, they’ll be tossed to the side like every other political prop used by the Left.

It’s up to voters to hold these liberal leaders accountable. The 0:25 second video needs to be seen by every single American voter.

But do you think the mainstream media will share it?