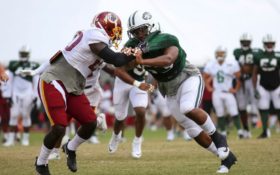 The brawl even spilled over into the section were fans were standing and watching the practice.

Watch a video of the brawl here —

Bleacher Report reported that, “Moses was ushered off the practice field and was limping on his right leg. The 27-year-old underwent ankle surgery in January.”

After the brawl, Jets coach Todd Bowles expressed his disappointment saying, “If they wanted to be boxers and wrestlers, they’d probably be in another sport.”

The teams will face off in a game on Sunday, but before then — they have two more days of joint practices to hold.

Fans better come prepared if they plan to attend those practices.