[Must see] Nancy Pelosi’s face spasms when she says... (she hates it!) - The Horn News 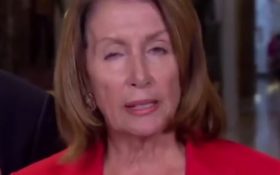 House Minority Leader Nancy Pelosi’s health issues have become frequent news among her critics… but this video may be the worst yet.

Rumors that Pelosi’s mental health is failing have circulated among critics for months. Pelosi’s opponents cite videos of her suffering “senior moment” — alarming footage that has become more and more common in 2018.

Monday was a different issue, however. Watch at just 0:04 in the video below as Pelosi chokes and has a face spasm when trying to say the word liberals hate most: “Constitution.”

“Our oath is to protect and defend our country from all… and our Constitution from all enemies, foreign and domestic,” Pelosi says to start the video, her face contorting in an unexplained spasm.

That’s not all. The video compilation, put together by The American Mirror, shows Pelosi struggling to share basic thoughts at her latest press conference.

Could you imagine how the mainstream media would react if President Donald Trump had these frequent “senior moments”? They’d call for his immediate resignation!

But because it’s a liberal hero like Pelosi, the health issues are completely ignored.

“It’s a danger this president is p… propo… uh… uhhh… is putting forth,” Pelosi says in the video right before she pauses to remember the word, “Intelligence.”

Later, when talking about Trump’s meeting with Russian dictator Vladimir Putin in Finland, Pelosi struggled to recall what the entire continent of Europe was called.

“That was about economy in Eastern… in, uh,” Pelosi said while her neck twitched. “In… uh, in… in Europe!”

As the press conference dragged on, Pelosi’s mental flubs seemed to get worse.

“The urgency of us acting in a bi-partisan way to say to the president…” Pelosi said at the end of the video in an attack on Trump. She then stops and stares off blankly. Suddenly, Pelosi scrambles for a piece of paper, looks at it and says: “John McCain.”

You can see video of the incident here —