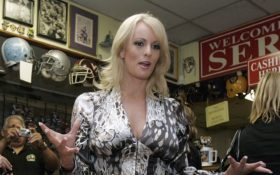 As a co-host of ABC’s “The View,” Meghan tends to shutdown her liberal costars for their far-left beliefs, but she was especially sharp when Daniels was a guest on the show April 17.

Meghan asked Daniels the questions that every American has been wondering since Daniels hit the spotlight.

As reported by The New York Post, Daniels made an appearance at Trump’s personal attorney Michel Cohen’s federal court date with her lawyer in tow.

“Daniels made a flashy appearance for a hearing over the client list of President Trump’s personal lawyer, Michael Cohen,” The Post reported.

That description does not sound like someone who was trying to stay out of the spotlight — that sounds like a woman trying to gather attention.

Meghan took note of that and stated the fact that everyone was already thinking. You can watch the clip here —

“It seems like a publicity stunt on some level,” McCain said.

“I mean, I think yesterday, because you didn’t have anything to do with the case, it seemed a little like you were just trying to get attention, which I understand that you’re being sued by our president, but it does seem like you’re benefiting a lot.”

She is benefiting more than anyone could imagine.

“I hadn’t heard your name until all this had happened and now you’re literally live on ‘The View’ giving an entire interview with us. So, it has been beneficial for your career,” Meghan continued.

I think it is safe to say that most Americans have never heard of Daniels before her alleged Trump scandal was made public — and we were all doing just fine not knowing her.

Daniels’ response was aimed at “The View” audience that is predominately female by playing the “poor working mother” card.

“Yes, there is a lot of publicity, but I did not do it for that,” she claims.

Meghan’s question needed to be asked. Americans got their answer we already knew.

As a 39-year-old woman nearing the end of her shelf life as a sexual entertainer, she found a new source for financial gain — and the target is our president.