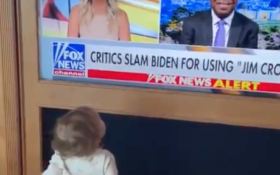 Fox News’ Kayleigh McEnany has been a very busy woman ever since she took the spotlight as former President Donald Trump’s press secretary.

And life hasn’t slowed down one bit, as she was recently promoted to co-host of the cable news network’s popular daytime program, “Outnumbered.”

Odds are, she may be on the road or working more than she’s home.

But McEnany’s young daughter still found a way to say hello in a cute moment that went viral around the internet.

McEnany’s sister — Ryann — posted a video to Twitter of her child Blake watching the former Trump aide during one of her television segments.

In the video, baby Blake can be heard saying “mama” repeatedly.

McEnany took some time afterward to thank her sister for capturing the lighthearted video.

This made my day!!! “Ma Ma!” On @OutnumberedFNC @FoxNews. Thanks for posting @RyannMcEnany ????❤️ pic.twitter.com/XzCkw27UiE

During her debut segment last week where her new colleagues welcomed her onto the program, she noted that “Outnumbered” had previously been her “lunchtime show.”

“It’s an honor to be here with both of you,” she told co-hosts Harris Faulkner and Emily Compagno. “This is my lunchtime show that I always watch, so to actually be here and share lunch with you guys, it’s an honor each and every day.”