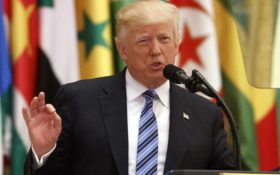 President Donald Trump on Sunday gave a speech on the United States foreign policy and the fight against radical Islamic terrorism — and the reaction around the globe has been overwhelming.

From coast to coast in the U.S., and even around the world, social media exploded with cheers of support.

“Iconic” and “moving” and “instant classic” was the buzz around the internet — and even mainstream media reporters were forced to acknowledge the power of Trump’s address.

Trump implored Saudi Arabia and other Middle Eastern countries to extinguish “Islamic extremism” emanating from the region, describing a “battle between good and evil” rather than a clash between the West and Islam.

In a pointed departure from his predecessor, Trump all but promised he would not meddle in the affairs of Mideast rulers — and asked instead that they focus their effort on extinguishing Islamic terror from the world.

“We are not here to lecture — we are not here to tell other people how to live, what to do, who to be, or how to worship,” Trump said, speaking in an ornate room in the Saudi capital. “Instead, we are here to offer partnership — based on shared interests and values — to pursue a better future for us all.”

Of course the reaction will break on partisan lines, but that was a solid speech with some hard truths. He didn't lecture, he reached out.

The president’s address was the centerpiece of his two-day visit to Saudi Arabia, his first overseas trip since his January swearing-in. For Trump, the trip is a reprieve from the crush of controversies that have marred his young presidency.

While running for the job he now holds, Trump heartily criticized President Barack Obama for not using the term “radical Islamic extremism” and said that refusal indicated that Obama did not understand America’s enemy.

In his Saudi speech, Trump showed the world what a real leader is, and openly condemned “Islamic extremism,” ″Islamists,” and “Islamic terror” while speaking directly to Islamic leaders from around the world.

The king has lavished praise and all the trappings of a royal welcome on the new American president, welcoming in particular Trump’s pledge to be tougher on Iran than Obama was.

Indeed, Trump and Salman were in lockstep on the threat Iran poses to the region when they addressed their fellow leaders: Trump accused Iran of “destruction and chaos” and the king said its rival “has been the spearhead of global terrorism.”