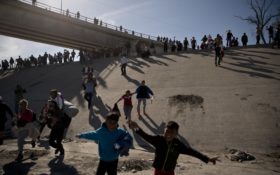 Hundreds of migrants rushed the U.S. border on Sunday afternoon, pushing past Mexican riot police and attempted to break through the port of entry into California. Video shows the would-be illegal immigrants attacking U.S. border patrol agents with rocks and other debris.

Local authorities finally stepped in after a march devolved into mayhem. U.S. agents were forced to fire tear gas to stop a mob trying to force their way past the international line.

Mexico’s Interior Ministry said it would immediately deport those who tried to “violently” enter the U.S. from Tijuana. Tijuana’s municipal government said that more than three-dozen migrants were arrested for disturbing the peace and other charges stemming from the march and what followed.

According to reports, the situation on Sunday at the border devolved after a large group marched to the U.S. border to appeal for the U.S. to speed the processing of asylum claims for Central American migrants marooned in Tijuana.

There, many of the migrants broke the border fence at the San Ysirdo port of entry in California, leading U.S. agents to fire tear gas.

According to The Gateway Pundit, “The defiant migrants threw rocks at border patrol agents and scattered after pepper balls and tear gas were deployed.”

The migrants broke through the fence and were repelled with pepper spray smoke pellets. #MigrantCaravan pic.twitter.com/pC8dDFRfOy

Here you can see some Hondurans throwing the rocks at U.S. border agents —

Here’s moment right before shot bang. You can see some rocks being thrown. pic.twitter.com/p0M9p7Rx4G

The U.S. agents responded by using non-lethal tear gas rounds to force the mob to move back to their camp —

The United States is teargassing the migrants to move them back to the camp. #MigrantCaravan pic.twitter.com/Tw4kXOtC9A

Following the chaos, American authorities announced they were going to shut down the nation’s busiest border crossing at San Ysidro for several hours at the end of the Thanksgiving weekend.

Throughout the day, U.S. Customs and Border Protection helicopters flew overhead, while U.S. agents on foot watched beyond the wire fence in California.

Department of Homeland Security Secretary Kirstjen Nielsen said in a statement that U.S. authorities will continue to have a “robust” presence along the Southwest border and that they will prosecute anyone who damages federal property or violates U.S. sovereignty.

“DHS will not tolerate this type of lawlessness and will not hesitate to shut down ports of entry for security and public safety reasons,” she said.

More than 5,000 migrants have been camped in and around a sports complex in Tijuana after making their way through Mexico in recent weeks via a controversial migrant caravan. Many hope to apply for asylum in the U.S., but agents at the San Ysidro entry point are processing fewer than 100 asylum petitions a day.