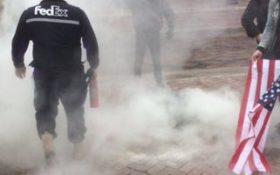 If you’re sick and tired of watching angry protesters destroy our flag, you’re not alone.

It seems FedEx delivery driver Matt Uhrin is fed up, too. When Uhrin saw a group about to burn some American flags in Iowa City, he leapt into action.

Armed only with a fire extinguisher and his courage, Uhrin single-handedly put a stop to the disgraceful act.

The heroic act was all caught on video. [Warning: This video contains harsh language.]

In the days following the video’s release, users on social media reacted with an outpouring of enthusiasm for the driver’s actions.

Of course, not everyone is so patriotic. Some Twitter users began calling for Uhrin to be fired.

@sgrubermiller He should be arrested for assault. If they fire him, that's his fault. I def don't want a psycho delivering to my house.

Afraid that backlash against Uhrin would cost him his job, thousands rushed to sign an online petition calling for FedEx to maintain the driver’s employment.

We have reviewed the matter in Iowa City involving driver Matt Uhrin. He remains a FedEx employee & we have no plans to change his status.

That’s the kind of spirit that will make America great again.

Comment “I’m with FedEx!” below if you support the company’s actions