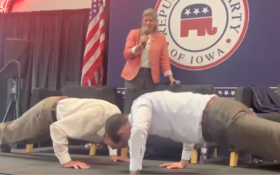 Sen. Chuck Grassley, R-Iowa, is one of the oldest sitting congressmen on Capitol Hill.

But that didn’t stop the 87-year-old from getting his hands dirty to perform some pushups in front of Republican supporters.

Grassley was joined by fellow Sen. Tom Cotton, R-Ark., during a GOP fundraising event in Iowa — and it wasn’t long before he and Cotton broke out in a little sweat.

Sen. Grassley had been speaking to the crowd about a ritual he’d begun performing during his 2016 campaign.

“On average, 22 veterans commit suicide everyday,” Grassley said. “You do 22 push-ups for every one of the veterans that died.”

Prior to the spectacle, Grassley joked for Cotton to take it easy on him.

“What he actually said is that he’d have to do one less than I, because he’s so old that if he tied me, it’d be like beating me. Thank you for taking it easy on me,” Cotton lightheartedly responded.

Sen. Joni Ernst, a fellow Iowa senator herself, counted in front of what was purportedly 200 conservative supporters. As the senators reached 22, the crowd in the background began roaring.

You can see the viral video for yourself below:

The fundraiser among senators Grassley, Cotton, and Sen. Joni Ernst, R-I.A., had been assembled to discuss key issues in politics and the current happenings of Congress.

It may come as no surprise, but this is not Grassley’s first pushup performance in the public eye.

In 2017, he challenged a Bloomberg reporter to a pushup contest.

Sen. @ChuckGrassley challenged me to a push-up contest after our @BloombergTV interview this morning. ???????? pic.twitter.com/koMA0ozNaJ

According to USA Today, the senator’s team reportedly has said he wakes at 4 a.m. every day to run three miles.

So we’ll have our eye out for the next time he decides to drop and give us 20.