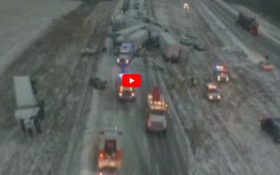 Authorities say at least two people have died in a series of crashes involving more than 100 vehicles on snowy and icy Missouri highways.

Footage from a drone flying over the crash site quickly went viral.

Sponsored: Stop using these 4 common household chemicals… your health depends on it

The Kansas City Star says the series of wrecks began around 2 p.m. Sunday, with the worst involving 30 vehicles on Interstate 44 near Rolla.

The Missouri State Highway Patrol says at least three other separate crashes on the interstate involved around a dozen vehicles each.

A 63-year-old woman was killed in one of the wrecks, and the interstate was shut down for hours.

About 50 miles to the east, another victim 32-year-old Heather Sapaugh, of Salem, was killed Sunday after losing control on an ice-covered stretch of Missouri 32 west of the town of Banner. The patrol says a 10-year-old passenger also sustained minor injuries.

You can see footage of the deadly pile-up here, recorded by the Conway Volunteer Fire Department and posted on their Facebook page late Sunday —