MUST SEE: Dem senator arrested on video - The Horn News 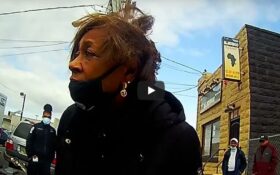 Video of the arrest of New Jersey state Sen. Sandra Cunningham went viral after police released their body camera footage of the incident on Friday.

The 17 videos, obtained thanks to a Freedom of Information Act Request filed by The Jersey Journal, are reportedly almost an hour long and show Cunningham struggling through a field sobriety test after striking two parked cars with her vehicle during a morning accident in early March.

She was arrested and has been accused of Driving While Intoxicated (DWI). Her first court appearance is Thursday, June 3.

Cunningham is a powerful Democrat in the state and is currently set to become the state’s Senate Majority Leader in January.

The video shows Cunningham claim she’d struck a “snowbank” that caused her to hit two parked cars. After being asked for her driver’s license, she seems to sway and drop multiple cards from her wallet.

“Have you had anything to drink today?” the officer asks. “No? Is there a reason you’re swaying, you have slurred speech, and having difficulty in performing basic directions?”

“The problem is I am very cold,” Cunningham replies.  She requests that the police officer have New Jersey’s Public Safety Director James Shea come to the scene of the crash.

“What does Director Shea have to do with anything right now?” the officer replies.

“Well, because I can see that you’re looking for something that isn’t there,” Cunningham says.

“So Director Shea has zero to do with the car… with this stop right now, ma’am,” the police officer responds. It doesn’t appear the officers called Shea to the scene.

After she appears unable to balance, Cunningham gives up on the sobriety test and says she feels “unsteady.”

“I asked if you had any medical conditions, you said ‘no.’ And now while we are doing the test now you are feeling unsteady?” the officer asks.

“You can feel unsteady at any time,” she replies. Cunningham requests medical attention but complains as the officers put her in handcuffs.

It remains uncertain if Cunningham will suffer political consequences if she is convicted. She is running unopposed in her district primary on June 8 in an overwhelming Democratic area.

Since entering public office, Cunningham has never received less than 70 percent of the vote in a general election and is next in line to lead the state Senate.

“Cunningham, a state lawmaker since 2007 and the widow of former Jersey City Mayor Glenn Cunningham, represents the 31st Legislative District, which includes Bayonne and parts of Jersey City,” NJ.com reported. “In Trenton, she is the deputy majority leader, chairwoman of the Senate Higher Education Committee and vice chairwoman of the Budget and Appropriations Committee.”

In March, it was reported that it was former New Jersey Gov. Jim McGreevey, D-N.J., that picked Cunningham up after the incident.

McGreevey said at the time that he thought Cunningham was suffering from a bad reaction to medication and was not drunk. McGreevey said he’d seen the senator react poorly to her medications in the past.

“This was a serious accident, which resulted in Sen. Cunningham’s request for medical assistance,” Cunningham’s attorney, Michael Rubas, reportedly told NorthJersey.com about the incident.

Footage from one of the body cameras was posted on YouTube —