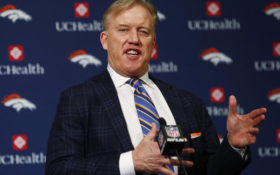 A cab driver in Washington got a surprise after mentioning to a group of passengers that John Elway was his all-time favorite quarterback and then learning that Elway was riding in the backseat.

The encounter happened Friday while Elway was in the capital for the inauguration. A Facebook video posted by a friend of Elway’s shows cab driver Sam Snow listing Elway as his top NFL quarterback, even though he’s a Steelers fan. One of the passengers asked Snow if he would know Elway if he saw him. The driver glanced at the backseat and immediately recognized the Hall of Famer.

Snow asked to take a picture and chided the Broncos legend for beating his beloved Steelers in the playoffs several times.