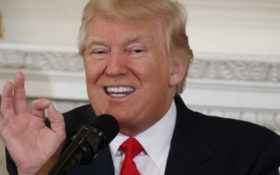 After learning that the Trump organization investigation in New York has been declared a criminal case, former President Donald Trump responded in a classic fashion.

The ex-president lashed out at New York Attorney General Letitia James, a Democrat, after her announcement that the inquiry into his family business in the state had evolved.

And he took to his personal blog to share his charged message.

“There is nothing more corrupt than an investigation that is in desperate search of a crime,” Trump posted on his blog.

“But, make no mistake, that is exactly what is happening here.”

“If you can run for a prosecutor’s office pledging to take out your enemies, and be elected to that job by partisan voters who wish to enact political retribution, then we are no longer a free constitutional democracy.”

“That is what these investigations are all about — a continuation of the greatest political Witch Hunt in the history of the United States. Working in conjunction with Washington, these Democrats want to silence and cancel millions of voters because they don’t want ‘Trump’ to run again.”

AG James has been after Trump for some time.

She targeted the president’s family business shortly after she was appointed to her post in 2019. Until this week, the pursuit of more than two years continued largely behind the scenes.

A spokesperson for James confirmed the probe has gone to the next level.

“We are now actively investigating the Trump Organization in a criminal capacity, along with the Manhattan D.A.,” spokesperson Fabien Levy said Tuesday.

You can read an excerpt of Trump’s response below —

I have built a great company, employed thousands of people, and all I do is get unfairly attacked and abused by a corrupt political system. It would be so wonderful if the effort used against President Donald J. Trump, who lowered taxes and regulations, rebuilt our military, took care of our Veterans, created Space Force, fixed our border, produced our vaccine in record-setting time (years ahead of what was anticipated), and made our Country great and respected again, and so much more, would be focused on the ever more dangerous sidewalks and streets of New York. If these prosecutors focused on real issues, crime would be obliterated, and New York would be great and free again!