Roman Catholics serving up Muskrat during Lent (what!?) - The Horn News 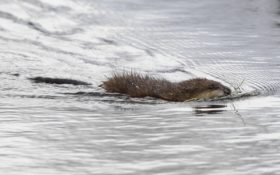 Detroit-area Roman Catholics have one more dining option during Lent than most other followers of the faith. The culinary appeal of that item, however, is up for debate.

A long-standing permission allows local Catholics to eat muskrat — a furry, marsh-dwelling rodent native to the area — “on days of abstinence, including Fridays of Lent,” according to the Archdiocese of Detroit. The custom dates to the region’s missionary history in the 1700s and is especially prevalent in communities along the Detroit River.

Missionary priests “realized that food was especially scarce in the region by the time Lent came around and did not want to burden Catholics unreasonably by denying them one of the few readily available sources of nutrition — however unappetizing it might be for most folks,” said Edward Peters, an expert on canon law who is on the faculty at Sacred Heart Major Seminary in Detroit.

The Rev. Tim Laboe grew up in an area of Michigan where the practice has long been a tradition and recalls sitting down for muskrat dinners with his grandfather.

“I don’t know if I enjoy more eating the muskrat or watching people try it for the first time, because it doesn’t look in any way appetizing,” said Laboe, dean of studies at Sacred Heart.

Laboe said some people describe it as tasting like duck, but he disagrees: “I think muskrat tastes like muskrat, and I don’t think I can compare it to anything else.”

Laboe, who said he enjoys the taste of the furry rodent despite its appearance, recalled a line he attributed to the late Bishop Kenneth Povish, the one-time head of the Lansing Diocese: “Anybody that eats muskrat is doing an act of penance worthy of the greatest of saints.”

Jokes aside, Laboe said the long history of parishioners chowing down on muskrat in the weeks before Easter is in keeping with the meaning of the season.

“The people that ate muskrat many, many years ago were poor, and they didn’t have much,” he said. “And so, in terms of people that do eat it, it does remind us, at least it reminds me, of the poor.”