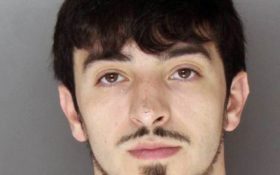 A man accused of beating his girlfriend to death and calling an Uber to take her to a hospital was charged with murder, according to police records.

Police said Nicholas Forman buckled 22-year-old Sabrina Harooni’s injured body into an Uber on Monday and had the driver take them to a hospital.

Harooni, of Gilbertsville, was pronounced dead at the hospital from injuries to her face, head and neck.

The Montgomery County Coroner’s Office determined the manner of Harooni’s death was homicide.

Forman, 23, of Collegeville, was arrested Thursday afternoon and charged with first- and third-degree murder.

Forman has denied the charges and said Harooni had been attacked by a group of women.

The affadavit details another account from an Uber driver who drove the couple home and told police that the couple got into a heated dispute regarding text messages from Harooni’s ex-boyfriend.

Police found a video on Forman’s cell phone including an audio and video recording shortly before midnight Sunday that appeared to show Harooni unresponsive and lying on her back. Steele said a man’s voice can be heard saying, “This is what a cheating liar gets.”

Authorities told the Associated Press on Friday that they don’t know if Forman has an attorney yet or if will be appointed a public defender. As police were him away to take him to prison on Thursday, he told journalists he was innocent and cursed at them.