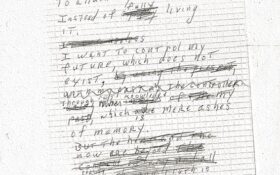 The widow of John McAfee, the British-American tycoon who died suddenly in a Spanish prison this week while awaiting extradition to the United States, on Friday demanded a “thorough investigation” of his death.

She said her husband did not appear suicidal when they last spoke — and she seems so sure, she leaked his alleged suicide note online.

“Here is the alleged suicide note found in John’s pocket,” Janice McAfee shared on social media Tuesday. “This note does not sound anything like someone who has no hope and is contemplating ending their life.

“This note sounds like one of John’s tweets,” she claimed, including the hashtags #NotASuicideNote #JusticeForJohnMcAfee.

“The handwriting is suspect & I doubt the authenticity of the note,” she said in a follow-up Tweet. “It reads more like someone trying to imitate John’s style of tweeting. And if this note was found in his pocket where are the markings of the note being folded into his pocket?”

Much of the handwritten note is crossed out and illegible.

Some things that can be read are disconnected phrases like, “I am a phantom parasite” and “I want to control my future, which does not exist.”

Here is the alleged suicide note found in John’s pocket. This note does not sound anything like someone who has no hope and is contemplating ending their life. This note sounds like one of John's tweets. #NotASuicideNote #JusticeForJohnMcAfee pic.twitter.com/QCODfvh8sh

Authorities in Spain claimed that everything at the scene in his cell indicated that the 75-year-old killed himself.

An official source familiar with the investigation told The Associated Press the suicide note had been found in McAfee’s pocket when his body was discovered.

McAfee’s Spanish lawyer, Javier Villalba, previously said that the family had not initially been informed by authorities about the note.

In her first public remarks after the software entrepreneur’s death on June 23, McAfee’s widow Janice McAfee demanded a “thorough investigation” to provide “answers about this was able to happen.”

“His last words to me were ‘I love you and I will call you in the evening,’” the 38-year-old told reporters outside the Brians 2 penitentiary northwest of Barcelona. She said they spoke earlier on the day he was found dead.

“Those words are not words of somebody who is suicidal,” she added at the time.

Since then, Janice McAfee has become outspoken that John McAfee’s death is a result of foul play, not suicide, and that Spanish authorities are engaged in a cover-up.

John McAfee was arrested at the Barcelona airport in October last year on a warrant issued by prosecutors in Tennessee who were seeking up to three decades of imprisonment for allegedly evading more than $4 million in taxes.

The day before he was found dead, Spain’s National Court had announced that it was agreeing to his extradition to the U.S. but the decision was not final.

“We had a plan of action already in place to appeal that decision,” Janice McAfee told reporters. “I blame the U.S. authorities for this tragedy: Because of these politically motivated charges against him my husband is now dead.”

The National Court judge said John McAfee had provided no evidence to back his allegations that he was being politically persecuted. “On the contrary, according to his own testimony, he took part in primaries of a certain party to defend his convictions with a result little favorable to him,” the judge wrote in the ruling seen by AP.

The couple reportedly met in 2012 in Miami and married the following year. John McAfee had several children from previous relationships, Janice McAfee said.

The entrepreneur had not been connected with the companies that took over the antivirus software he built after he sold his shares in the 1990s. That early success had made McAfee rich and followed him in his troubled biography.

In 2012, he was sought for questioning in connection with the murder of his neighbor in Belize, but was never charged with a crime. The controversy didn’t stop him from making long-shot runs for the U.S. presidency starting in 2016.

But it was his more recent tax problems that kept him away from the U.S., the country where the British-born entrepreneur was raised and had built his early success.

The Tennessee prosecutors’ indictments from 2020 showed that the tycoon allegedly failed to declare income made by promoting cryptocurrencies, attending speaking engagements and selling the rights for a documentary on his eventful life.

“Even though he was born in England, America was his home,” Janice McAfee said. “He came there when he was a child. He had his first girlfriend there, his first case, you know, his first job. He made his first millions there and he wanted to be there. But, you know, politics just wouldn’t allow for that to happen.”

John McAfee’s social media postings indicated that he had chosen a northeastern Spanish coastal resort town as his base in Europe at least since late 2019.

“All John wanted to do was spend his remaining years fishing and drinking,” his widow said on Friday. “He had hope that things would work out. We knew that there would be an uphill battle to continue to fight this situation. But he’s a fighter … And anybody that knows John, that knows him even a little bit, knows that about him.”

“He was just so loving. He had a big heart and he just loved people and he just wanted to have peace in his life,” Janice McAfee added. “My prayers are that his soul has found the peace in death that he could not find in life.”

In 2019, John McAfee said that he would never kill himself, and if he were found dead it was because he was “whackd” by U.S. officials — and had the phrase tattooed on his bicep.

Getting subtle messages from U.S. officials saying, in effect: "We're coming for you McAfee! We're going to kill yourself". I got a tattoo today just in case. If I suicide myself, I didn't. I was whackd. Check my right arm.$WHACKD available only on https://t.co/HdSEYi9krq🙂 pic.twitter.com/rJ0Vi2Hpjj