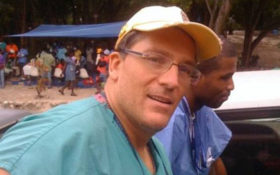 A celebrity bone surgeon became embroiled in the Clinton Foundation’s Haiti controversy when he and another doctor penned a startling 2010 article that exposed the corruption at the heart of the Haitian earthquake relief efforts.

Police say the body was found with a knife buried in the chest, but investigators ruled the mysterious death a suicide according to The New York Post. There were no signs of forced entry at his downtown Manhattan apartment.

The violent death came as a shock to those who knew the orthopedic surgeon. Lorich, who was happily married and extremely successful, reportedly left no suicide note for his family, which included three children.

The mainstream media has noted that Lorich was being sued by former NFL player Michael Cox over alleged complications following his ankle surgery.

“But Cox’s lawyer, Steven North, believed the lawsuit would have been covered by the insurance of Lorich’s employer, the Hospital for Special Surgery (HSS) and the New York-Presbyterian Hospital, where Lorich served as associate director of the Orthopedic Trauma Service,” The Epoch Times reported.

Lorich made headlines twice in recent years. Once for treating U2 lead man Bono after the rock star’s near-fatal bicycle accident in 2014.

And more recently, when his name was found in twice-failed Democratic presidential candidate Hillary Clinton’s emails, which were released during her private server scandal last summer.

As a whistleblower to the inadequate response to the Haitian earthquake, Lorich was fiercely critical of the Clinton Foundation’s efforts on the ground.

Lorich made original appeals directly to Hillary Clinton herself, WikiLeaks revealed this summer.  The emails were forwarded to Hillary by her then-Chief of Staff Cheryl Mills, in which Lorich warned that he had no choice but to take his complaints public.

In the now-declassified emails, Lorisch complained to Hillary that her efforts “only portended the difficulties we would have once we arrived” and that the Clinton Foundation had a “complete lack of any organization on the ground. Noone [sic] was in charge, we had the first functional up and running hospital in the P OP [sic] area yet noone and I me NOONE came to the hospital to assess what we were doing, what we were capable of doing and what we would need, to be more efficient.”

“We all felt as though we abandoned these patients and that country and feel terrible,” Lorich’s email wraps up. “Our role now being back in NY is to expose the inadequacies of the system to the media in the hopes of effecting a change in this system immediatly [sic].”

Unsatisfied with the Clinton Foundation’s response, the famed surgeon then wrote his blistering criticism.

“The difficulties in getting in — despite the intelligence we had from people on the ground and Dr. Helfet’s connections with Partners in Health and Bill and Hillary Clinton — only hinted at the difficulties we would have once we arrived,” he wrote in his 2010 op-ed slamming the medical situation in the Caribbean country.

Nothing was ultimately done about the Clinton Foundation’s corruption in Haiti.

Sunday, Lorich ended up dead on the floor of his Manhattan apartment with a knife in his chest.