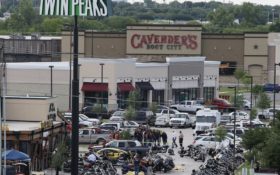 Three bikers were indicted on murder charges Wednesday stemming from a 2015 shooting involving police outside a restaurant in Waco, Texas, including a prominent member of the Bandidos motorcycle club.

The indictment marks the first murder charges in the case and comes just eight days before the statute of limitations runs out. More than 20 other bikers were re-indicted on new charges ranging from rioting to tampering with evidence.

Police arrested nearly 200 bikers following the shooting at a Twin Peaks restaurant that left nine people dead and 20 injured. Investigators say the incident was sparked by rivalries between the Bandidos and Cossacks motorcycle clubs. Waco police officers monitoring the gathering also fired on the bikers.

Jeff Battey is among the three Bandidos members charged with murder. His attorney didn’t immediately return a message from The Associated Press.

According to Waco police incident reports reviewed by The AP, Battey, a former Marine, and another Bandido charged with murder Wednesday, Ray Allen, were seen “triangulated” over Matthew Smith, a Cossack who died at the scene from gunshot wounds. The third Bandido member indicted Wednesday was Glenn Walker.

All the bikers arrested following the shooting were each charged with engaging in organized criminal activity, a felony. But prosecutors have dropped 154 of those cases in the last four months, saying they wanted to focus on those who were “more culpable.”

Only one biker — Jake Carrizal, a locomotive driver and the president of the Dallas chapter of the Bandidos — has been tried. His trial ended in a hung jury and a mistrial last fall.

Carrizal was among the bikers re-indicted on Wednesday. He’s not facing a new charge of rioting

The county’s district attorney said in a statement in February announcing the first round of disposed cases that information gleaned during Carrizal’s trial was “invaluable” in his office’s decision to narrow the focus of its investigation.