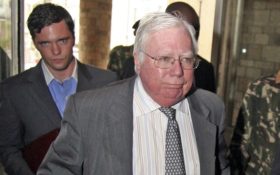 The document, which was drafted as part of a plea offer to Jerome Corsi, provides an unprecedented window into an active part of Mueller’s investigation into Russian election interference and possible coordination with Trump’s associates. It reveals that Mueller is keenly focused on whether Americans close to the Trump campaign had any foreknowledge of WikiLeaks’ plans to release hacked material during the 2016 presidential campaign.

The document’s contents were first reported by NBC News, and a copy of it was posted online by The Washington Post. Corsi told The Associated Press on Tuesday evening that the document had been provided to his attorney by Mueller’s team. Stone has denied knowing about WikiLeaks plans’ ahead of time. Mueller spokesman Peter Carr declined to comment.

Corsi said the document, which mirrors similar ones filed by Mueller in previous plea deals, contains portions of emails he exchanged with Stone in the summer of 2016 about WikiLeaks. But he denied that he intentionally lied to investigators about the emails, and said that was why he rejected the plea offer , which would have charged him with one count of making false statements.

“I did not ever willfully and knowingly give them false information,” Corsi said. He said he forgot about the emails in question during his first interview with Mueller’s team, noting they were among 60,000 contained on the laptop he provided to the special counsel’s office.

According to the document, the emails were exchanged in late July and early August of 2016, more than two months before WikiLeaks published thousands of emails stolen from the private email account of Clinton campaign chairman John Podesta.

In late July 2016, the document shows, Stone emailed Corsi, asking him to get in touch with WikiLeaks founder Julian Assange, who has been living in Ecuador’s embassy in London since 2012. Stone said he wanted Corsi to try to obtain emails the group possessed about Clinton. The document says Corsi passed Stone’s request to an “overseas individual,” whom Corsi identified as Ted Malloch, a London-based academic who has said he was also questioned by Mueller. And on Aug. 2, 2016, the document quotes Corsi’s response to Stone.

“Word is friend in embassy plans 2 more dumps. One shortly after I’m back. 2nd in Oct. Impact planned to be very damaging,” wrote Corsi, who was in Europe at the time. He then told Stone it was time for Podesta to “be exposed as in bed w enemy if they are not ready to drop HRC,” a reference to Clinton.

On Tuesday, Corsi told the AP that the email he sent Stone — which accurately forecast that WikiLeaks would release derogatory information about Podesta in October — was based on his own deduction and not the result of any inside information or a source close to the group.

“It’s all a guess. That email — ‘word is’ — is 100 percent speculation on my part, a package so that Roger’s not going to dismiss it because I’m real sure I’m right,” he said.

He said that he has never had contact with Assange and that he didn’t obtain any advance knowledge of WikiLeaks’ plans.

Corsi said he disclosed to investigators — including Mueller team members Jeannie Rhee, Aaron Zelinsky and Andrew Goldstein — that he had told Stone that Assange had Podesta emails. “But I maintained and still do that I figured it out,” he said, adding: “I made it sound maybe like I had a source, but I didn’t. And I don’t think Stone ever believed me.”

Corsi said the prosecutors wouldn’t believe him, thinking he was trying to protect Stone. And he believes he was threatened with a felony charge “because I couldn’t give them what they wanted” by connecting Stone to WikiLeaks.

Corsi said he also believes the plea offer was extended to prevent him from speaking publicly about his contact with Mueller’s team. He said he doesn’t know if Mueller will now follow through with charging him. The last time his attorney, David Gray, heard from Mueller’s team was on Monday after he had publicly rejected the deal.

According to Corsi, they told Gray: “We’ll take it from here.”