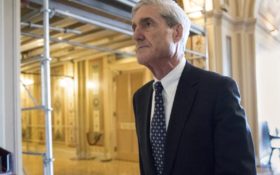 Special counsel Robert Mueller’s controversial probe is about to lose one of it’s biggest allies in President Donald Trump’s administration — and it could finally force the long-running and expensive investigation to wrap up and present Mueller’s final conclusions.

Deputy Attorney General Rod Rosenstein, who appointed Mueller and remains his most visible Justice Department protector, is expected to leave his position soon after William Barr is confirmed as attorney general, a person familiar with the plans said Wednesday.

For critics of the special counsel’s probe, this news has been treated as a welcome sign that the end may be near.

Barr, who served in the position in the early 1990s and is Trump’s pick to do the job again, has a confirmation hearing before the Senate Judiciary Committee next week and could be in place at the Justice Department as soon as February.

Barr has made critical comments of the Mueller investigation in the past, including an unsolicited memo he sent the Justice Department last year critiquing Mueller’s investigation into whether the president had sought to obstruct justice by firing former FBI director James Comey. He’s said that Mueller has gone well outside his original mandate.

Rosenstein plans to leave soon after Barr’s confirmation, though no date has been set and there is no formal plan for the departure.

Mueller is investigating Russia’s meddling in the 2016 election. Rosenstein and his chief deputy have continued to maintain day-to-day oversight over the probe, a senior Justice Department official told reporters last month.

At a news conference in December, Rosenstein said that Mueller’s investigation would be “handled appropriately” no matter who is overseeing it.

He said Barr would be an “excellent attorney general when he is confirmed.”

Barr is expected to face questioning from Democrats about his views of the Mueller investigation at next week’s hearing.

The departure is not entirely unexpected.

It is common for attorneys general and other cabinet secretaries to have their own deputies.

Barr has told some people close to him that he wanted his own No. 2.