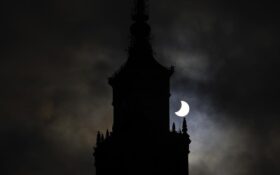 Much of Europe and parts of Africa and Asia saw the moon take a bite out of the sun during the second and last solar eclipse of the year.

The partial eclipse took about four hours. At its peak, the eclipse covered more than 80% of the sun.

A solar eclipse happens when the moon’s path crosses in between the Earth and the sun, blocking out the sun’s light. In a partial eclipse, the three aren’t perfectly aligned — so a crescent of the sun still peeks out.

The next solar eclipse is in April — a rare hybrid kind that will appear as a total eclipse across parts of Australia and Asia.