How much is THIS Obama program still costing you? (shocking!) - The Horn News 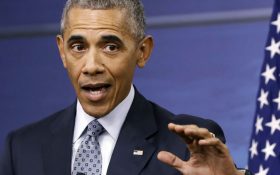 When the Deferred Actions for Childhood Arrivals (DACA) Executive order was enacted by President Barack Obama in 2012, it cost taxpaying Americans money.

DACA, or “The Dream Act” provides permanent legal status to illegal immigrants who arrived in the US younger than 16 years old and are no older than 35, provided they complete two years of college.

From the start of the DACA program, the Department of Homeland Security (DHS) claimed the amnesty program would be fully funded by DACA applicants.

Like much of Obama’s presidency, that was a bald faced lie. The actual cost of the DACA program is staggering.

The Center for Immigration Studies reports 62% of illegal immigrant household receive some form of assistance. Further, US taxpayers have invested billions in K-12 education for the estimated 690,000 illegal immigrants who qualify for DACA.

The National Center for Education Statistics reports the cost per pupil to in K-12 school averages $12,000 per year. The per pupil costs for students in the country illegally can be as high as $18,000, totaling an estimated $31.25 billion per year.

The bulk of the additional expense funds the training and employment English as a Second Language (ESL) teachers, bilingual textbooks, tutoring and the like, according to a Federation for American Immigration Reform (FAIR) report.

Education costs do not include public school lunch programs, which have doubled to $18 billion since 2000.

But providing free K-12 education isn’t enough. Illegal immigrants who attend public colleges are eligible for an additional taxpayer-funded tuition subsidy to the tune of $6.2 billion a year.

The lack of transparency on the part of our federal government makes it impossible to know the exact amount taxpayers are forking over for DACA recipients.

All for illegal immigrants to get a free education on the American taxpayer’s back.