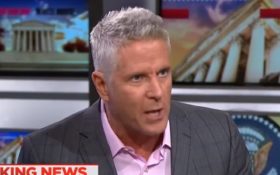 The mainstream media has scalated its hatred in a call for a violent “revolution” aimed at driving President Donald Trump out of power.

Critics say MSNBC’s latest attempts to rose viewers to action are so violent, they could be illegal.

And ironically, the network justified its call by saying that Trump is a threat to democracy.

“Our democracy is under siege,” MSNBC’s Danny Deutsch said during an appearance last Friday on “Deadline: White House.” “People need to start taking to the streets!”

“We have a guy, a president who clearly is owned by [Russian President Vladimir] Putin,” said Deutsch.

“This is a dictator,” he said.

Sponsored: Worried About Alzheimer’s? Don’t do this in bed

You can watch his violent rant here —

Deutsch told MSNBC viewers that the time had come to stop talking.

Instead, they needed to organize and start a civil war.

“This is not time to analyze and pundit,” said Deutsch. “We need a revolution at this point. And I’m not doing TV here.”

In other words, he is not just ranting for ratings — he wants to actually see viewers engage in violence.

And his unhinged call for action may be just the thing needed to push hardcore liberals over the edge. After all, the so-called “resistance” has never had any trouble getting physical. Professional left-wing activists have frequently led George Soros-funded protests where they roughed up Trump supporters during and after his successful presidential campaign.

And Deutsch’s stunt could land him and top brass at TV’s most anti-Trump network in the slammer.

Federal law bans anyone from trying to convince viewers of “the duty, necessity, desirability, or propriety of overthrowing or destroying any government in the United States by force or violence.”

Anyone who breaks this statute could get up to 20 years in prison, and a large fine.

Deutsch couldn’t have been any clearer that his call to sedition was dead serious.

In fact, the whole network may be on the hook for his remarks – thanks to the show’s Never Trump host.

During the interview MSNBC’s hostess, Nicolle Wallace — who critics calls a Republican RINO — actually started screaming in agreement with Deutsch’s call to action:

Deutsch: This is not something to analyze anymore.

An MSNBC host making these comments at official capacity legally places the whole network in a seditious conspiracy, and at least Deutsch could face jail time. The law also allows the offenders to be fined.

A tough prosecutor could charge every single MSNBC employee in any position of responsibility or slap a hefty fine against the whole board of directors.

Because these network bigwigs knew Deutsch’s views when they booked him.

Deutsch seemed to be airing a private vendetta on MSNBC’s airwaves, where he has called President Trump “evil,” “vulgar,” “a bully,” “a pig” – and “physically disgusting.”

Deutsch is feeding red meat to the lefty network… and to the kind of person that eats up MSNBC programming.

MSNBC crossed the line from airing a poorly rated political hate speech to calling for violence — and they need to be held accountable.

It turns out he didn’t know how right he was.

Sponsored: The one word that makes any guy over 50 feel awful