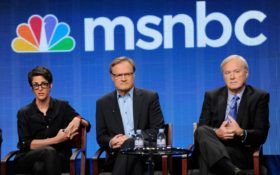 MSNBC host Chris Matthews has been slammed by a bombshell investigation — and the facts that were uncovered are seriously disturbing!

Multiple witnesses have come forward to accuse Matthews of running a nasty work environment. But this isn’t as simple as inappropriate comments… it’s so bad, it qualifies as abuse investigators found.

Additionally, these new bombshell allegations of sexual misconduct and abuse have even been verified by NBC producers.

Matthews was described as “liable to fly off the handle at the slightest mistake,” by two former NBC producers.

Staffers from his nightly show, “Hardball” have even described themselves as having “battered wives syndrome.” Some women have claimed that Matthews has repeatedly made inappropriate sexual advances towards them, and explained that Matthews has a secret system to rate the attractiveness of the guests on his show.

It’s bad news for NBC News, which has released numerous top stars over allegations recently — especially because this investigation tops them all. The Daily Caller reports that one of the former producers suggested, “Sadly, I know other women who won’t even be an anonymous source regarding Chris [Matthews] because they’re that concerned about the door closing on career opportunities in media.”

Another former producer explained “He would eye down a woman who walked on set or comment on their features or what they were wearing,” explaining to The Daily Caller that it looked like Matthews was undressing the women with his eyes. “He would objectify them and interrupt them in a way that he would never do to his male guests. He has a very outdated view of women.”

Staffers have suggested that he even screams and throws objects at them. Matthews sounds more like a tyrant than a talk show host!

“The screaming is beyond the screaming you’ve ever heard,” one source said. “You just feel so under attack. He did it so openly… what are you supposed to do when somebody is verbally abusing you and attacking you this way?”

Sources allege that Matthews leaves staffers in tears for berating them during commercial breaks and after the show. One witness has come forward to claim that he even chased a staffer of his set, while screaming at them while other show guests watched in complete terror.

“Seeing it would have made you shudder … you don’t forget something like that,” said a former producer who described the incident.

After a former staffer accused Matthews of sexually harassing her in 1999, NBC paid the woman a significant chunk of cash to keep her mouth shut.

This investigation could be the final nail in his coffin.