MSNBC star has MELTDOWN over Obama spy scandal (is he crazy?) - The Horn News 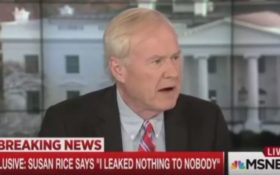 Ever since the Obama administration’s Susan Rice was discovered to be behind an alleged conspiracy to spy on then President-elect Donald Trump, the liberal media has been having fits.

According to Matthews, it seems, any news journalist that questions Susan Rice is both sexist and racist.

Watch his stunning comments for yourself —

He later then says, “So they are making [Rice], you know, basically they’re defaming her without any reason to do so, all because she’s a woman. Maybe because she’s a black woman?”

The mainstream media is hopelessly out of touch.

And it gets worse.

On CNN, anchor Don Lemon has refused to cover the story at all. According to Lemon, evidence that the Obama administration was illegally spying on the president is a “distraction” from the anti-Trump Russian story he wants to talk about.

“Let us be very clear about this,” Lemon told his viewers. “There is no evidence whatsoever that the Trump team was illegally spied on. There is no evidence that backs up the president’s original claim. On this program tonight, we will not insult your intelligence by pretending otherwise. Nor will we aid and abet the people who are trying to misinform you, the American people, by creating a diversion.”

In fact, this shameful bias is widespread.

The bombshell story is being ignored across all the major networks except one, Fox News, which reported that, “ABC and NBC did not cover the Rice story in their evening newscasts, while CBS spent 45 seconds on it, but defended Rice against the claims.”

It’s no wonder the media’s old guard is dying – everyday it becomes more clear to America that the media’s liberal spin is out-of-control.