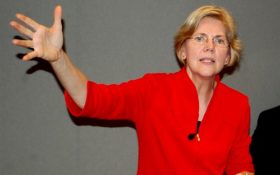 Sen. Elizabeth Warren, D-M.A., was dealt a serious blow to her 2020 hopes on Wednesday — but it wasn’t from her political opponents.

It was one of the biggest stars on ultra-liberal MSNBC, who called Warren a “coward” and unpresidential.

“Morning Joe” co-host Mika Brzezinski even said that Warren wasn’t worthy of the White House — all in response to Warrens refusal to appear at a Fox News town hall.

“I would argue that a presidential candidate should be able to walk into any situation, walk into any fire, and have the confidence and the ability to put it out by spreading the democratic values and his or her beliefs,” Brzezinski said. “I think they should go into Fox [News] and do all the town halls that they can do.”

In Warren’s words from earlier this week, “Fox News is a hate-for-profit racket that gives a microphone to racists and conspiracists.”

In other words, Warren says that one who watches Fox News is part of a racist conspiracy against America.

The nasty comments went too far, even for MSNBC. Brzezinski didn’t buy it, and said Warren was too much of a “coward” to make an appearance anywhere that may be unfriendly.

That’s not all. Brzezinski, who has locked horns with Trump in the past, said she’s sick of Warren’s political drama. She called out Warren shortly after the 2016 election for her sour attitude — and says it has gotten even worse since then.

“Do you lead on anger?” Brzezinski asked, visibly disgusted. “Because that doesn’t seem very constructive to me. I gotta tell you, I loved her — but I’m getting tired of this act.”

Warren is too scared — and even ultra-liberal MSNBC can’t stomach her anymore.