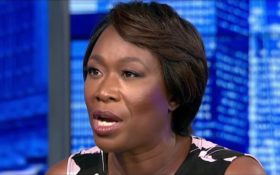 MSNBC star Joy Reid the host of the popular show “AM Joy” and has become a rising star for her fierce criticism of President Donald Trump. This week, though, she has found herself in serious trouble after decade-old blog posts were discovered.

It seems Reid wasn’t always the darling that her liberal viewers have embraced — and now she’s facing the wrath of the liberal groups she once pandered to.

A former blog of the MSNBC star called The Reid Report was recently discovered by a savvy internet user. Originally deleted, the blog’s old content was traced using an internet archive system called the “Wayback Machine.”

What the blog contained was surprising.

Before joining NBC News, it turns out Reid’s former blog was filled with homophobic content and anti-gay slurs.

Turns out this rising liberal star spent years talking about homosexuality being “immoral” and unnatural. She admitted she was probably homophobic, and said adult gay men are often pedophiles.

The backlash against Reid has been swift.

One gay-rights group, PFLAG National, has revoked an award in light of the news. “While Reid was slated to accept PFLAG’s Straight for Equality in Media award next month at the organization’s 45th anniversary celebration, the group opted to take back the offer after dozens of blog posts from The Reid Report containing anti-gay material were uncovered by an Internet sleuth,” Mediate reported.

Reid has refused to apologize for the posts. Instead, she has denied they’re hers at all. Instead, she has started claiming that a mysterious hacker with a grudge against her planted the anti-gay slurs as a way to discredit her.

In a statement released Monday, the pundit claimed the “offensive and hateful references” were fabricated and is the opposite of her “personal beliefs and ideology.”

Cyber experts say there’s zero evidence that a hacker tampered with the blog archives, however. Critics say it’s proof Reid is lying to try and save her own skin.

“When we reviewed the archives, we found nothing to indicate tampering or hacking of the Wayback Machine versions. At least some of the examples of allegedly fraudulent posts provided to us had been archived at different dates and by different entities,” the programmers behind the internet archive site “Wayback Machine” said in a statement.

These cyber experts said Reid’s lawyers has contacted them asking for evidence that The Reid Report blog had been hacked.

“We let Reid’s lawyers know that the information provided was not sufficient for us to verify claims of manipulation,” their statement said.

Despite the outcry, Reid will reportedly remain on-air while the network waits for law enforcement investigations into hacking allegations “play out before taking any action.”