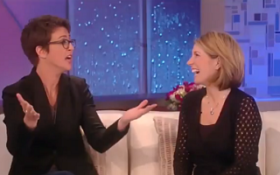 MSNBC star Nicolle Wallace was caught pushing a nasty lie about Mississippi Sen. Cindy Hyde-Smith on Tuesday — and she was called out during live television.

Wallace was ranting about a joke Hyde-Smith made in passing during the campaign trail, where she said she liked someone so much she’d be in the “front row” even if she was his guest at a public execution.

“In a comment on Nov. 2, I referred to accepting an invitation to a speaking engagement,” Hyde-Smith said. “In referencing the one who invited me, I used an exaggerated expression of regard, and any attempt to turn this into a negative connotation is ridiculous.”

That wasn’t good enough for Wallace, who implied Hyde-Smith was a racist that was unfit for governance. Wallace, by the way, is supposed to be the network’s Republican commentator.

“I think what a lot of people wonder — not just coastal elites, but people from states other than Mississippi — how can people vote for someone who joked about public hangings?” Wallace asked.

That was just the beginning. She said Hyde-Smith “went to a segregation academy” in High School.

“I believe it’s been reported, her daughter did, or does, as well,” Wallace continued.

That’s when she got caught pushing a liberal lie.

“You already see — and I don’t know that you could say there’s a cause and effect — but yesterday two nooses were found hanging on two different trees at the state capitol,” Wallace said.

Like all the past’s lynchings, though, those nooses were both tied and hung on trees by Democrats.

“Well, the nooses were put up in protest to highlight Cindy Hyde-Smith and her statement. So that was a protest move,” guest Elise Jordan said. “I just want to be clear about who was behind that.”

You can see video of the exchange here —

In which Nicole Wallace tries to blame Cindy Hyde-Smith for nooses found hanging in Mississippi, and her colleague informs her the nooses were an anti-Cindy Hyde-Smith protest pic.twitter.com/x4Wej2qt9n

It’s this kind of misinformation, regularly spread by MSNBC and other mainstream media outlets, that President Donald Trump and his allies call “fake news.”

For once, the host was caught and corrected.

With how easily Wallace spun the facts, though, one must wonder: How many millions of people watched the other CNN and MSNBC lies on Tuesday that weren’t corrected?