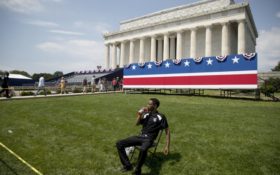 President Donald Trump is bringing tanks, bombers and even Air Force One to his Fourth of July celebration that is traditionally is light on military might — and MSNBC is scrambling to pull the plug on it.

According to Politico, MSNBC executives intend to totally ignore Trump’s “Salute to America,” a celebration of the United States and Independence Day in Washington, D.C. hosted by the White House.

The president shared a statement that read:

“This year’s annual Independence Day celebration on the National Mall, will feature music, flyovers, fireworks, and an address by President Donald J. Trump. Salute to America will honor each of the nation’s five service branches with music, military demonstrations, multiple flyovers including a flight demonstration by the Blue Angels, and much more.”

CNN has yet to announce whether or not it will air some of the festivities. Fox News will live feed the celebration during “Special Report,” from 6 to 8 p.m.

Still, the show will go on, whether MSNBC likes it or not.

Trump tweeted on Tuesday that military leaders are “thrilled” to participate.

“Military Leaders are thrilled to be doing this & showing to the American people, among other things, the strongest and most advanced Military anywhere in the World,” Trump tweeted. “Incredible Flyovers & biggest ever Fireworks!”

“We’re gonna have a great Fourth of July in Washington, D.C.,” Trump told reporters,“it will be like no other and it will be special.”

Senior presidential adviser Kellyanne Conway said the speech will highlight “the success of this administration in opening up so many jobs for individuals, what we’ve done for veterans,” in addition to celebrating democracy, patriotism and the military.

A ticket-only area in front of the Lincoln Memorial is being set aside for VIPs, including members of Trump’s family, friends and members of the military, the White House said.

The Republican National Committee is also distributing a “small number” of tickets to the event.