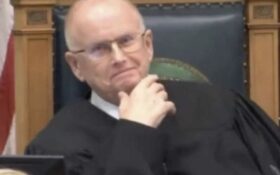 The Kyle Rittenhouse trial has spawned a media frenzy… but you might be seeing fewer headlines after today.

Judge Bruce Schroeder banned MSNBC from his courtroom for the rest of the trial. He namechecked a MSNBC producer accused of ordering an employee to follow the jury bus.

“I’ve instructed that no one from MSNBC News will be permitted in this building for the duration of this trial,” the judge said in court on Thursday.

The MSNBC employee reportedly ran a red light near the jury bus, and he received a ticket.

@KenoshaPolice, an unverified Twitter account, said on Thursday, “Police suspect this person was trying to photograph jurors. This incident is being investigated much further.”

Some Twitter users voiced concerns about the possibility of jury tampering, a felony in Wisconsin.

However, @KenoshaPolice tweeted, “There was no breach of security regarding the jury, nor were there any photographs obtained.”

NBC News, MSNBC’s parent company, issued a statement to CNN on Thursday. The network acknowledged a traffic violation near the jury van but denied any intention to contact the jurors.

“This is a very serious matter, and I don’t know what the ultimate truth of it is,” the judge said. But, it would go without thinking that someone who is following a jury bus — that is a very, extremely serious matter and will be referred to the authorities for further action.”

There was no breach of security regarding the jury, nor were there any photographs obtained. This investigation remains active and open, no further information.

Rittenhouse is being tried as an adult, as any 17-year-old would be in Wisconsin’s criminal court.

In other words, the court records are publicly available, and MSNBC can still report on them.

However, without reporters in the courtroom, MSNBC may fall behind. The network may become stuck reporting yesterday’s news.

The Daily Wire called it a good riddance. The outlet tweeted, “MSNBC you later.”