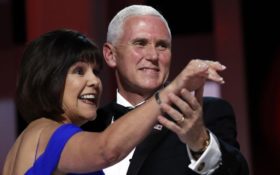 Vice President Mike Pence’s wife, Karen, has opened their government residence to more than a few new inhabitants: honeybees. At least 15,000 of them.

Mrs. Pence showed off the beehive Tuesday, partly to draw attention to a decline in managed bee colonies that she and other officials say could negatively affect U.S. agricultural production.

One of three bites of food taken in the United States is possible with the help of pollinators such as bees, butterflies, birds and bats, she said during a media event at the sprawling U.S. Naval Observatory compound in northwest Washington, where the vice president’s official residence is located.

Managed honeybee colonies add at least $15 billion dollars a year in crop value by increasing yields and helping ensure quality harvests. But a years-long decline in honeybee colonies “presents a serious challenge to our ability to produce many of the agricultural products that we sell and enjoy today,” Mrs. Pence said.

Fruits, vegetables and nuts are among 90 or so crops that managed honeybees pollinate for farmers, she said.

The decline in honeybee colonies is attributed to factors ranging from stress caused by parasites to poor nutrition to lack of interest in caring for them.

Agriculture Secretary Sonny Perdue, who attended the unveiling, said Mrs. Pence was a “great example” of what everyone can to do help honeybees. He said his department was working to help reverse the decline in the beehive population across the country.

Beehives are time-consuming to manage, but there are other ways consumers can help. Mrs. Pence encouraged them to plant bee-friendly flowers and herbs, such as wildflowers, lilacs, poppies, Black-eyed Susans, mint, sage, squash, tomatoes, oregano and rosemary. They can also set out basins of water or install birdbaths so thirsty bees can get a drink.

“Just in the spirit of democracy, let’s all get involved and do our part, whether it’s planting the plants or hosting a beehive just as Mrs. Pence has done here,” Perdue said.

More than 80 percent of the land in the Pences’ home state of Indiana is dedicated to agriculture, and Mrs. Pence said the crops grown there depend on the “pollinating power” of bees. She installed a beehive at their official residence in Indiana and said she thought it would be helpful to do the same in Washington.

The new hive has between 15,000 and 20,000 honeybees, said Larry Marling of Eco Honeybees, the Virginia-based company that was hired to install the beehive. The bee population could grow to between 40,000 and 50,000 bees by the end of the season, he said.

The bees at the Pence’s residence will help the flower and vegetable gardens on the property, where kale, lettuce, tomatoes, herbs and radishes grow. The honey they produce will be given away as gifts. “The great thing about honey is it doesn’t spoil,” Mrs. Pence said after she led a group along a walking path and down a sloping lawn to within a few feet of the busy hive.

Former first lady Michelle Obama included a beehive with the garden she started on the White House South Lawn in 2009, also to help with pollination. The Obama White House used the honey in meals, in addition to bottling and gifting it.

Melania Trump, the current first lady, has kept the garden.