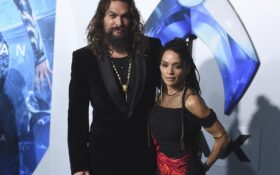 Movie star Jason Momoa, best known for his role as the superhero Aquaman, was involved in a head-on collision with a motorcycle on Sunday.

Remarkably, everyone is reportedly OK after the incident.

Momoa was reportedly driving his Oldsmobile muscle car on Old Topanga Canyon Road Sunday, near the Calabasas area in California. He collided with a motorcycle that was traveling in the opposite direction while coming around a curve in the road.

According to TMZ, the motorcyclist had veered into Momoa’s lane and struck the car’s left front end. The rider then hit Momoa’s windshield and was thrown over his vehicle, but was able to land on his feet.

The motorcycle driver was taken to the hospital for “minor injuries” that included “bruising to their leg and an injury to their thumb,” but is otherwise fine. Momoa was unhurt in the accident.

Police and emergency crews arrived on the scene and made a report, but no further investigations are expected to come from the accident.

It has been an up-and-down year for Momoa. He finished filming on a sequel to his superhero film Aquaman, which grossed over a billion dollars worldwide. But in January, Momoa and wife Lisa Bonet — the actress best known for her role as one of Bill Cosby’s daughters on the hit 1990’s “The Cosby Show” — ended their 16-year relationship.

A joint statement was posted on the “Aquaman” star’s Instagram page letting fans know that he and his wife were parting ways.

“We have all felt the squeeze and changes of these transformational times… A revolution is unfolding (tilde)and our family is of no exception,” the post said, adding that they were announcing the split so “as we go about our lives we may do so with dignity and honesty.”