Motive of the Las Vegas killer… - The Horn News 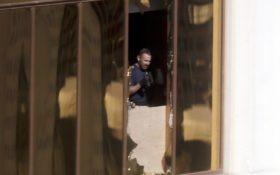 What caused madman Stephen Paddock to plot and execute the indescriminate slaughter dozens of innocent people? Authorities say they’re searching for answers — but may never know

Police say they’re seeking to know the motive of the bloodthirsty Las Vegas gunman but have had little more to chase than hints and shadows.

Paddock led such a low-key, private life that no one seemed to know him well, and those who did had no sense he was capable of the deadliest mass shooting in modern American history.

Where other mass killers have left behind a trail of plain-sight clues that help investigators quickly understand what drove them to violence, Paddock, 64, had nearly no close friends, social media presence or other clear connections to the broader world.

Traitor CNN Refuses To Show You This Video [sponsored]

Even the No. 2 official in the FBI said Wednesday he was surprised investigators have not uncovered more about why a man with no obvious criminal record would cause so much bloodshed.

“There’s all kinds of things that surprise us in each one of these events. That’s the one in this one, and we are not there yet,” FBI Deputy Director Andrew McCabe said. “We have a lot of work to do.”

Working with what little they know, investigators have zeroed in on a weapon-buying binge Paddock went on one year before he gunned down 58 people Sunday at a country music festival from a 32nd-floor room at the Mandalay Bay casino resort before killing himself.

They wonder if he had some sort of mental break at the time that drove him to start making plans for mass murder.

They also know he rented an apartment in a Las Vegas high-rise over another music festival the weekend before the massacre, though not why.

They know he was a major gambler and are looking at related records, though even in very public casinos he played the very private game of video poker.

They know he had a plan to survive the shooting and try to escape, though would not say how.

“This individual and this attack didn’t leave the sort of immediately accessible thumbprints that you find on some mass casualty attacks,” McCabe said. “Putting aside the somewhat dubious claims of responsibility that we see in each one of these instances, we look for actual indicators of affiliation, of motive, of intent, and so far we’re not there. We don’t have those sort of indicators.”

Clark County Sheriff Joseph Lombardo said at a news conference Wednesday night that Paddock must have had some help along the way given his huge arsenal the explosive materials found in his car, and his meticulous plan, but they don’t know who that might be.

Some who thought they knew him intimately could provide no help.

“He never said anything to me or took any action that I was aware of that I understood in any way to be a warning that something horrible like this was going to happen,” Marilou Danley, 62, said in a statement read by her lawyer outside FBI headquarters in Los Angeles.

Danley returned Tuesday from the Philippines, where Paddock had sent her before the attack, and was being interviewed by the FBI.

Analyzing Paddock’s computer, cellphone and other electronic devices, Investigators have found no obvious ideological motive, no clear connection to extremists or activist groups or outward display of mental illness.

Paddock wired $100,000 to the Philippines days before the shooting, said a U.S. official who was not authorized to speak publicly because of the continuing investigation. Investigators are trying to trace that money.

Danley, who was overseas for more than two weeks, said she was initially pleased when she was wired money from Paddock to buy a house for her family in the Philippines. But she later feared it was a way to break up with her.

She said she loved Paddock as a “kind, caring, quiet man” and hoped they would have a future together. She said she was devastated by the carnage and would cooperate with authorities as they struggle to get inside Paddock’s mind.

The previous weekend, Paddock had rented a high-rise condo in a building that overlooked the Life is Beautiful alternative music festival featuring Chance the Rapper, Muse, Lorde and Blink-182, said Lombardo, who offered no other details about what led Paddock there.

On Sept. 28, the 64-year-old high-stakes gambler and real estate investor checked into Mandalay Bay and specifically requested an upper-floor room with a view of the Route 91 Harvest music festival, according to a person who has seen hotel records turned over to investigators.

Paddock wasn’t able to move into the room until Saturday, said the person, who was not authorized to speak publicly and disclosed the information to the AP on condition of anonymity.

The room, which goes for $590 a night, was given to Paddock for free because he was a good customer who wagered tens of thousands of dollars each time he visited the casino, the person said.

Authorities are looking for hints in those details of the kind of life he lived, and the kind of victims and venue he targeted, said David Gomez, a former FBI national security and criminal profiler.

“We may never know to 100 percent certainty,” he said. “But they will find out.”