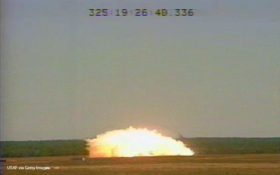 Long gone are the days of former President Barack Obama — this is President Donald Trump’s administration now. And he’s finally let our military off the chain.

Thursday, Secretary of Defense James Mattis sent a lot of Islamic terrorists straight to hell — and he did it in typical Mattis-style.

The Pentagon says U.S. forces in Afghanistan dropped the military’s largest non-nuclear bomb on an Islamic State target in Afghanistan.

Adam Stump is a Pentagon spokesman. Stump says it was the first-ever combat use of the bomb, known as the GBU-43.

The Air Force calls it the Massive Ordnance Air Blast bomb. Based on the acronym, M.O.A.B., it has been nicknamed the “Mother Of All Bombs.”

Weighing in at a staggering 21,000 lbs, the bomb is so massive it cannot be carried by a standard bomber. Instead, it was delivered via a C-130 cargo plane.

“We kicked it out the back door,” one U.S. official told Fox News.

The bomb creates a massive blast radius that stretches for up to a mile in each direction.

For comparison, the tomahawk cruise missiles fired last week at a Syrian airforce base was approximately 1,000 lbs. each.

Stump says the bomb was dropped on a cave complex believed to be used by ISIS fighters in the Achin district of Nangarhar province, very close to the border with Pakistan.

It’s doubtful any that happened to survive will ever go back.

“As [ISIS] losses have mounted, they are using IEDs, bunkers and tunnels to thicken their defense,” the commander of U.S. troops in the region, Gen. John Nicholson, wrote in a statement. “This is the right munition to reduce these obstacles and maintain the momentum of our offensive against [Islamic terror].”