Most environmental president ever is... Trump? - The Horn News 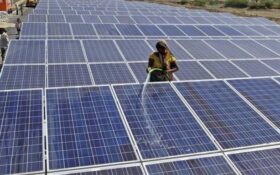 I’m sure you didn’t hear about it from the media, Al Gore, or major environmentalist PACs. Instead of giving him credit, Green liberals cranked up efforts to throw him out of office.

Trump gave the green light to the largest solar installation in U.S. history.

The Gemini Solar Project is a $1 billion, 7,100-acre complex that will stand outside Las Vegas like a clean energy monument.

When it’s completed, it will power 260,000 homes in southern California. The renewable energy landmark will support 1,800 temporary jobs, create 19 permanent jobs, and bring home $3 million every year for the federal government, according to the Interior Department.

People inside the industry knew how big a deal the permit is and gave grudging thanks.

“We appreciate the work that the Trump Administration has done to make this historic project a reality,” said Abigail Ross Hopper, president and CEO of the Solar Energy Industries Association, a lobbying group.

The U.S. slapped 30% tariffs on Chinese solar panels, and the EU and India shut Beijing’s panels out of their countries.

And renewable energy sales jumped a whopping 44% last year. It almost definitely kept growing through 2020…until the Wuhan flu shutdown.

Add in a boom in clean natural gas supported by fracking, and “greenhouse gas” emissions—which environmentalists insist will destroy the world—keep on falling.

President Trump thwarted China, supercharged the U.S. solar industry, opened a record-setting power facility, and brought jobs and power to deep-blue states from a plant owned by a Democratic megadonor.

The Left should love him, right?

Nine of the largest U.S. environmentalist groups issued a statement saying, “Donald Trump has been the worst president for our environment in history.” His policies “threaten our climate, air, water, public lands, wildlife, and oceans.”

“We are all in to help elect Joe Biden,” said LCV leader Carol Browner, a socialist who served in the Clinton and Obama administrations.

And Greta Thunberg stared daggers at President Trump when their paths crossed at the elite World Economic Forum last fall.

Instead, they’re now complaining this installation will “threaten” the Mojave desert tortoise—because there are “only” 200,000 of the critters in the area.

And they complain the plant will be an eyesore to a historic railroad camp.

The GOP should be used to liberals’ rank hypocrisy. Republicans have a long history of supporting the environment—and being trashed by environmental extremists.

The EPA was created by Richard Nixon. George H.W. Bush’s amendments to the Clean Air Act gave the government draconian new powers to stop businesses and private individuals from using their own land as they see fit.

The Green Left’s continued ingratitude and hatred should prove to everyone that the leading environmentalist groups aren’t part of a serious movement.