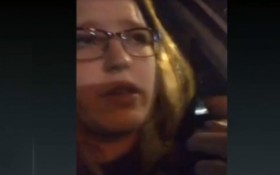 “I’m drunk,” a Florida driver repeatedly told followers on the social media app Periscope, staring at her cellphone’s camera, mounted on the dashboard. The police must have been watching, because she was soon arrested and charged with driving under the influence.

The Lakeland Police Department released video from the app Tuesday, after the arrest from the weekend made national headlines. In the video, a glossy-eyed Whitney Beall says that she thinks she’s blown a tire and that she’s driving very slowly.

At one point, the 23-year-old woman says she turned right when she meant to go left.

Other Periscope users messaged Beall, urging her to stop driving. Some called the police.

An officer logged onto Periscope and located Beall’s car.

Officers say Beall failed a field sobriety test and refused to take a breath test. She was released on $500 bail.