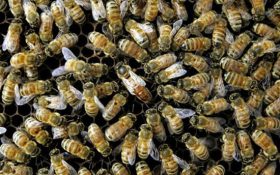 Investigators south of Houston are trying to determine who killed more than 500,000 bees by setting hives on fire, toppling some over and tossing others into a pond.

The vandalism was discovered early Saturday when a Brazoria County sheriff’s deputy patrolling a rural road near Alvin saw flames shooting up from a field.

Steven Brackman, head of the Brazoria County Beekeepers Association, says the destruction occurred at a critical time, in part because queen bees are laying thousands of eggs a day at this time of year.

The 20 hives were home to European honeybees, which experts say are declining globally due to pesticides and a parasite that shortens their lifespan.

Authorities say it appeared to be an intentional act of vandalism.