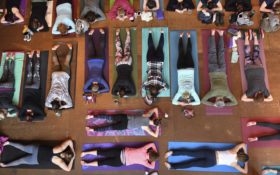 If you can do a downward-facing dog, you’re among the increasing numbers of Americans doing yoga.

A new report says more adults — and even kids — are practicing yoga and meditation.

A government survey conducted last year found 14 percent of adults said they had recently done yoga, and the same percentage had recently meditated. That’s up from about 10 percent and 4 percent from a similar survey done five years earlier.

For kids ages 4 through 17, about 8 percent had recently done yoga, up from 3 percent. For meditation, it was about 6 percent, similar to the earlier survey.

Experts say yoga, meditation and some other forms of complementary medicine have been increasingly promoted as ways to reduce stress and anxiety and improve health.