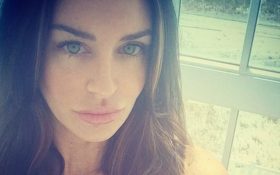 Authorities in Pennsylvania found the body of an ex-Playboy model dead in her apartment after following up on a welfare check.

According to The Sun, authorities had already been to the model’s home just three days prior after she reported that jewelry and expensive handbags were missing from her apartment.

An autopsy report concluded that Christina Carlin-Kraft had died as a result of “ligature strangulation,” and it was not immediately made clear if the prior burglary had anything to do with her murder.

A neighbor at Carlin-Kraft’s apartment building explained that the model had just moved into her new apartment only a week ago.

Admore resident Dave Farina was shocked to hear about a suspected murder in his town.

He said, “We never had that type of thing in Ardmore. Hardly ever. It’s enough to make me cry.”

“I’m pretty sure that it will be resolved because this police force is second to none and I’m praying for them to find out who did this and bring them to justice,” added Farina.

On Saturday, Carlin-Kraft had reported a robbery, but it was not immediately clear what caused the police to perform a welfare check at her residence on Wednesday.

“There does not appear to be any current concern for residents in the area,” read a joint statement from the county district attorney and police superintendent.

No arrests have been made yet in her death.