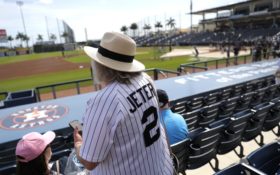 Major League Baseball is likely to cancel the rest of its spring training game schedule due to the coronavirus and probably will announce that the start of the season will be delayed indefinitely.

The people spoke on condition of anonymity because no decision had been announced.

They said baseball Commissioner Rob Manfred planned a conference call with his executive council Thursday to discuss the situation and then a call with controlling owners of the 30 clubs. An announcement would follow.

MLB had continued to play into Thursday, when Florida Gov. Ron DeSantis said he strongly recommended to local authorities and organizers that they limit all mass gatherings.

The big league season had been scheduled to start March 26, its earliest opening other than for international games.

MLB has not had a mass postponement of openers since 1995, when the season was shortened from 162 games to 144 following a 7 1/2-month strike that also wiped out the 1994 World Series. Opening day was pushed back from April 2 to April 26.

Player salaries were reduced by 11.1% in 1995 because the games were lost due to a strike.

If regular-season games are lost this year, MLB could attempt to reduce salaries by citing paragraph 11 of the Uniform Player’s Contract, which covers national emergencies.

“This contract is subject to federal or state legislation, regulations, executive or other official orders or other governmental action, now or hereafter in effect respecting military, naval, air, or other governmental service, which may directly or indirectly affect the player, club or the league,” it says.

The provision also states the agreement is “subject also to the right of the commissioner to suspend the operation of this contract during any national emergency during which Major League Baseball is not played.”