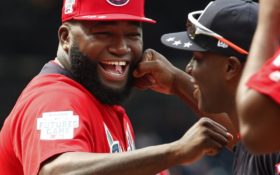 Former Red Sox slugger David Ortiz made his first public appearance in the Dominican Republic on Sunday nearly six months after he was shot in what authorities called a case of mistaken identity.

The Dominican-born superstar was greeted by a standing ovation and raucous cheers when he entered the Quisqueya Stadium Juan Marichal for the Game of Legends, a charity exhibition and home run derby featuring Dominican major league players and retired stars.

“Praise God and long live the Dominican Republic,” Ortiz said to the thousands of fans in the country’s most important stadium.

He thanked his fans, fellow players and the press for its support after the shooting.

“I’m happy to be here with my people,” he told The Associated Press before the game. He did not play.

A 10-time All-Star and three-time World Series champion, Ortiz helped the Red Sox end their 86-year championship drought in 2004 and batted .688 against the St. Louis Cardinals in 2013 to win the Series MVP.

He maintained a home in the Boston area and had been living part of the year in the Dominican Republic, where he was often seen getting his cars washed and hanging out with friends, including other baseball players, artists and entertainers.

He was seriously wounded June 9 when a hit man allegedly hired by a drug trafficker mistakenly shot him as he sat with friends in a Santo Domingo bar, authorities have said. They said the target was meant to be Sixto David Fernandez, a cousin of the man alleged to have arranged the attack.

Authorities said the hit men confused Ortiz with Fernandez. The two men are friends and were sharing a table.

Officials said the killing was contracted by Victor Hugo Gomez, described as an associate of Mexico’s Gulf Cartel. Authorities said Gomez wanted Fernandez killed because he believed his cousin turned him into Dominican drug investigators in 2011. They said Gomez then spent time in prison in the Dominican Republic with one of at least 11 suspects arrested in the shooting.

Gomez later resurfaced in the U.S. as one of dozens of suspects sought by federal authorities following a March 2019 drug trafficking sting in Houston.

Doctors in the Dominican Republic removed Ortiz’s gallbladder and part of his intestine after the shooting and he underwent further surgery in the U.S.

“I thought he was never going to come back here,” said Filvia Núñez, a fan who said she was surprised and delighted to see Ortiz Sunday.