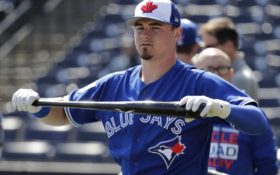 Deputies were dispatched to a shopping center parking lot in Dunedin on Friday afternoon following reports that a man sitting inside an SUV was exposing himself, according to a Pinellas County Sheriff’s Office news release.

Deputies said they spoke with McGuire, 24, who was cooperative and did not deny the allegations. The release didn’t say what exactly McGuire was doing.

McGuire was charged with a misdemeanor count of exposure of sexual organs and given a notice to appear in court on March 16. He was not taken to jail.

“He has been in communication with the Blue Jays and we are working to gather more information,” the statement said. “Out of respect for the legal process, neither he nor the club will comment any further at this time.”

The team’s spring training facility is located in Dunedin, just a few miles from where McGuire found by deputies.