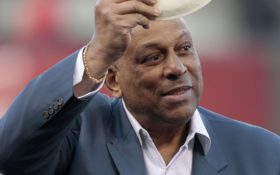 The Giants gave an update Wednesday on the condition of the 80-year-old Cepeda. He was taken to a Bay Area hospital late Monday.

Cepeda has been a regular at San Francisco home games. He played first base during his 17 seasons in the majors, beginning with the Giants. He also played for St. Louis, Atlanta, Oakland, Boston and Kansas City.